The Elan Valley Challenge - From a Medic's Point of View

The Elan Valley Challenge MTB and Sportive event was held on 23rd May, and it'll go down as perhaps one of the wettest, most miserable days (weather-wise!) Red Kite Events has had to endure!

With low cloud and fog over the high ground, gale force winds, heavy rain, hailstones on the hills and temperatures closer to those you might experience in November rather than on a mid-summer's June day, it looked to be hard day for riders and event organisers alike. I was due to spend my day out with Strata Medical, the medical team that covers most of the events organised by Red Kite.

As per our agreement the night before, I was ready and waiting by 8.30am, huddled in a jacket and attempting to keep off the worst of the rain and cold. After pick up, our first task of the day was to get the maps out, check the routes the MTB riders would be doing and pack all the gear we needed into the 4x4s.

From a medic's perspective, it was the worst sort of day. There was no helicopter support due to the low clouds, and the 130km MTB ride passed through a valley so remote it was accessible only on foot in these difficult conditions. The course covered high terrain and many areas with little or no phone reception, and communications would be difficult.

Ever ready for such challenges, the Strata Medical team have decades of experience between them, and Robin, who is also a trained mountain rescue volunteer, knows every little patch of signal available in the remotest of places. In fact, he probably knows better than the mobile phone companies where to find signal! The Strata Medical vehicles are 4x4s and 'The Beast', an aptly named ex-minibus raised up onto 4x4 suspension, which serves as an ambulance, able to go into some of the most isolated areas. It was clear to see that all the cyclists taking part in the Elan Valley Challenge were in safe hands with Strata Medical covering the event!

By 9.30am, the call came in from the event organiser, Neil, that the 130km had to be cancelled due to deteriorating conditions. Undeterred, most of the riders who had planned to do this route decided to do the 82km ride instead, and by 10am, most of them were out on the course. Robin, Jan and I were also out, heading along forestry tracks and mountain roads to reach our first location, on the hilltop overlooking Strata Florida.

Here, a certain amount of skill with maps was required, and after a slight diversion, we reached our destination. Robin had of course known that there would be signal at this location, and the radio was working well too, with a reasonably clear link between us and the other medical team out covering the course near Devil's Staircase, the Abergwesyn Common and the bottom of Drygarn Fawr. We were up and running!

I decided the time was good for some photographs, and climbed out of the 4x4 to do so. The cross-wind immediately almost knocked me off my feet and took my breath away. My immediate thoughts turned to the cyclists who were, no doubt, right at that second, battling through the wind somewhere along the course. I took a few photos of the thick fog which obscured our view (I was assured by Robin that on a fine day, you can see all the way to the sea from where we were) and retreated to the 4x4 again to get warm. 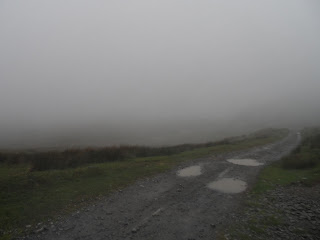 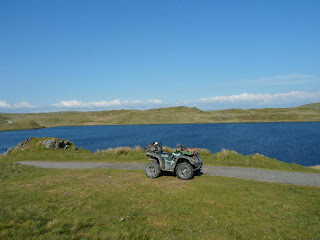 An extreme contrast! Top photo - the day of the event, the bottom photo, a few days before whilst Neil was out marking the route.

The morning passed quietly. By 12pm we had had 8 riders through and only 1 bike fault, no medical complaints at all. Robin helped the guy fix his bike (the chain had slipped off) and most riders paused to have a quick chat with us, mostly about the weather. The wind was not so bad in the valleys and all the riders were enjoying the day, despite the weather! Looking at them, covered in mud and soaked, I couldn't help but think they must be slightly mad! We were informed that around Claerwen Reservoir, the winds had been so strong that cyclists had to pedal downhill to make any headway!

I was struck by the amount of information shared between the medical units, and the amount of detail that passed between them. It was rare for five minutes to go by without the radio crackling to report something new. The stream of information was almost constant. I quickly realised this was part of what made the team so successful, along with their excellent local knowledge. Robin also kept in close contact with the event venue in Elan Valley, ringing every half hour or so to report back and get more information.

More than 300 riders were out on the course, completing either the 30km, 50km or 82km routes. By 1.30pm, an almost steady stream of cyclists were passing us to head downhill towards the second feed station, where riders stop to refuel and take a breather. As usual, there was a choice of cakes and savoury snacks available, all home-made and provided by the Drovers Rest in Llanwrtyd Wells. As well as this, there were bowls of jelly beans and other sweets and Nuun hydration products for riders. 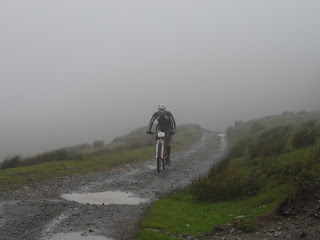 So far, there had been no medical accidents or incidents. Robin explained that on a wet, cold day like this, riders were more likely to ride slowly and take their time on difficult descents. We were more likely to see riders suffering from exhaustion, chills, hypothermia or muscle injuries than trauma injuries such as cuts, bruises and breaks or fractures. On hot, dry days when the routes are dry and faster, there are usually more falls and this is when the trauma injuries occur.

Our first call came through at 2pm. We sprang into action - a man was at Strata Florida Abbey suffering from cramp. We set off down the hill, my first experience of off-roading! Halfway down, we came across another rider coming up the hill. He was exhausted and cold and wanted to be picked up. Robin suggested he carry on to a more sheltered spot and we would come back for him once our patient at the Abbey had been seen to. We were now out of communication with the other medical unit and could not radio them to collect the rider, but continued down to Strata Florida as quickly as possible, with some concern for the rider up on the hill.

Luckily, our first patient was recovering well from his cramp by the time we reached him, and was sitting drinking a cup of tea when we found him in the Abbey visitor centre. Whilst Robin loaded his bike into the 4x4 and fetched a coat and blanket to keep the rider warm, Jan borrowed the visitor centre phone to report back to the event venue and tell them all was well. 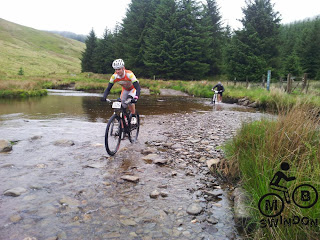 We set off back up into the forestry to locate the other cold and tired rider, briefly stopping to send two other riders (one with a broken bike who could not continue) to the Abbey to await pick-up. Back in the forestry, we found a patch of phone signal with good radio links and contacted the other unit. They have picked up the other rider and were going to take him to Llanwrtyd Wells for collection. We agreed to rendezvous to pass our passenger over to them too and both could then be taken to Llanwrtyd Wells before 'The Beast' continued to Rhayader and the event venue. 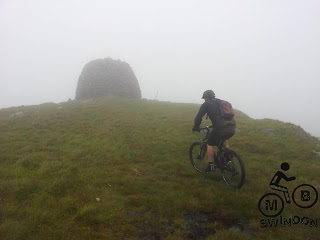 Concerns had been raised that one rider is missing. He was supposed to complete the 30km course but somehow managed to get himself onto the 82km course instead and hadn't returned to the venue. His wife was getting concerned. We agreed to look for him once we have passed our passenger over to the other medical team, and consequentially found ourselves heading up onto the Drygarn half an hour or so later. Luckily, we found him fairly quickly. With him having been the last rider onto the Drygarn, we headed out of Abergwesyn and set off for Rhayader with him on-board.

Considering the conditions and the exposure to the elements the riders had to endure, it was a good day from a medical point of view, with only three pick-ups. We arrived at the event venue and reunited our passenger with his worried wife, who joked that she would be going with him next time, on a tandem! The last person came in at around 7pm, having gotten himself lost and completing the 82km route instead of the shorter route he'd intended to do! Probably feeling very proud of himself, he declared he'd had a great day.

Indeed, the comments received after the event were hugely positive, despite the weather, with everyone praising Red Kite Events for putting on such a good event. It was clear that all the riders had had a great day and really enjoyed themselves.

Without Strata Medical, it is likely that events such as this, with routes covering such rough and remote terrain, would not be able to run as successfully as they do. Strata Medical can go where normal ambulances cannot, and with their experience and knowledge, provide fantastic medical care to those who may need it. Like the cyclists, I had a great day out at the Elan Valley Challenge and was provided a rare and fascinating  insight into the world of the mobile medical team.

The next event to be held by Red Kite Events is the Shropshire Devil II on Sunday 30th June. It is a sportive event only, with the start and finish lines at Shrewsbury Sports Village. There will be a choice of three routes: 50 miles, 75 miles or 110 miles. All three will take in the fantastic local scenery, heading into west into North Wales to include Lakes Bala and Vrynwy. Strata Medical will be providing medical cover for this event.

Please visit www.redkite-events.co.uk for online entry and further information regarding the Shropshire Devil II or any of the other events run by Red Kite Events. Alternatively, check out our Facebook page: https://www.facebook.com/pages/Red-Kite-Events/133742836741821?fref=ts or follow us on Twitter: @redkiteevents1.

You can also visit Strata Medical's webpage at www.strata-medical.co.uk or find them on Facebook: https://www.facebook.com/StrataMedical?directed_target_id=0.


NB: At Strata Florida Abbey, the woman running the visitor centre informed us that they were hoping to raise enough money to get a defibrillator at the Abbey. She said that the area is often used for events and sports such as the Elan Valley Challenge. The village is the first port of call if anything happens in the area during these events, and locals are concerned that they are so remote, if anything should happen, not even a helicopter would always be able to get there in time. With this in mind, villagers have found out that they can get Welsh Government training and funding to match what they can raise to get a defibrillator. With this in mind, Red Kite Events has donated a sum of money towards the fund, and we wish the village the very best in their fundraising efforts to get a worthwhile and necessary piece of equipment to this remote area.